Share a memory
Obituary & Services
Tribute Wall
Read more about the life story of John and share your memory.

John Milton Marsh, of Norwell and Scituate, Massachusetts, passed away on January 17th, 2023. He was the beloved husband of Carol Newcomb Marsh (deceased) and loving father of Jane, John, Stephen and Susan Marsh, and proud grandfather of seven grandchildren and three great grandchildren.

A memorial celebration for John will be held February 4th at 1 PM, at the First Parish of Norwell Unitarian Universalist, located in Norwell Center. All are invited and encouraged to bring memories to share.  A reception will be held at the church immediately afterwards.

John had many passions and interests. If you would like to make a contribution in his name, please give to the charity of your choice.

John was a resident of Norwell for over 85 years. He moved with his parents from Quincy to Norwell in 1936 when he was seven. His father, Harry Marsh, was a candy maker and opened his first store in Scituate. Eventually, the Marsh family of three moved their store to Norwell, to the dirt road that was Washington Street at that time.

John joined the family business as a child, learning early how to make candy and fudge. When sugar was rationed during the war, the family started selling groceries, and when STAR Market opened in Queen Anne’s corner, John added beer, wine, and spirits. Over time, the family store evolved into a full liquor store with John and son Stephen in charge.

John met Carol Newcomb in the Norwell schools, and after a short romance they were married at Norwell Town Hall in 1952. John and Carol lived across the street from the store, and their family grew to include Jane and John, and twins, Susan and Stephen.

During World War II, John worked as a pipe-fitter at the Quincy Shipyard, joined the Merchant Marine, and became part of the Naval Reserves. Afterwards, in Norwell, he became an on-call fireman who’d run down the street to the fire house when the town’s fire alarms rang. All his life, John deeply enjoyed being out on the water, boating, fishing or pulling his lobster pots.

Devoted son, patriarch to his family, and proud grandfather and great grandfather, John loved the ocean, fished the seas, and farmed the land, raising crops, chickens, geese, sheep, pigs, and cattle for fun and to feed his family. He is remembered as a good, honest man who lived in the present, saw what needed to be done, and did it.

To send flowers to the family or plant a tree in memory of John Milton Marsh, please visit our floral store. 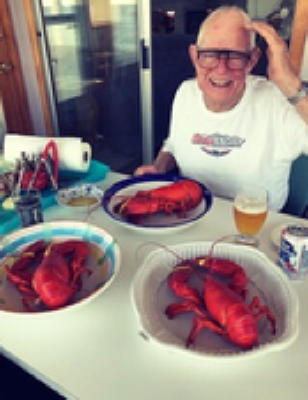